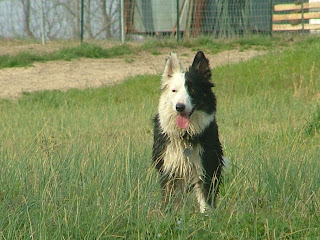 It was good to see you - and I'll be happy to snarf your tomatoes (or anyone else's, lol) any time. ;) What good puppies they were, hunh? It was a nice day, and I'm glad I was able to be part of it. I was really pleased with Chris' progress, also, by the way.

You are certinly welcome to my tomatoes anytime.Yuck!
Yep, the pups were fun to watch. I thought little Rose was exceptionally awesome. She sure did alot more than Id have ever expected. Hank did good too, but Rose happens to be a little more precious to me for some reason I hope Chris can be trust worthy enough to enter in Robin's trial. I can see that she is making progress. If not, Ive always got Lex, as long as everyone promisses not to laugh to much at her new cooler do. May give em both a go! As always it was great to see you too,though I still wish it could be more often, and am hoping you feeling better.
Darci

We promise not to laugh at Lex's 'do. ;) I'm feeling just a little better today - more human. Get any dog working done this past weekend? The weather was great!

No, no dog working the weekend. (she says hanging her head low) Shoulda, coulda, woulda, but I worked Saturday and Sunday??? I cant remember! Musta just been lazy, though Im sure I did some thing...... I think.
Glad your healing and feeling better. Looks like your enjoying your new house guests, what cuties!
D.