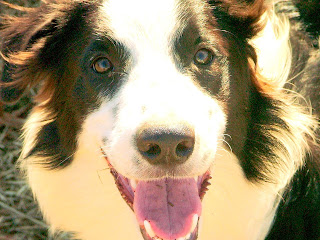 What's odd, is that I was just this past weekend, thinking about Rose, and Hank. How sad it was for you to lose Rose, and how Hank is now the up and comer. Sometimes, we get the dogs we need, not the ones we want. I hope that you two have wonderful times to come, and many memories to cherish.

Ive just been noticing lately, that hank seems to live on the outskirts of the other dogs when we all interact. I caught a glimpse of him last week, acting like he was on the outside looking in, and realized Ive been letting him for so long. I finally had to think about the whys, not that I didnt already know them, but had to acknowledge that I have this lovely dog here and I need to quit allowing it to happen. No matter how he got here, and wether or not I like the reasons, I still have this sweet and happy dog that deserves to be included more and appreciated more for who he is than what he is a product of and what he came from. Thoughts of my Rose are still always with me. I dont think Ive ever been so taken with a puppy before.Not even Chris!

I love this post! I think I'd love Hank.

As much as my heart still aches for the loss of your little Rose, today it aches for little Hank. Having read this post (with tears rolling down my cheeks), I feel that Hank is trying to tell you that Rose lives in him and he wants you to accept that he will, in fact, give to you all you ever wanted or expected from his little sister. God sent Hank home to you with the spirit of little Rose to guide him. She lives on in Hank, the goofy, playful, loving little pup that he is.

Little?? LITTLE!!!!
Hank is a horse! LOL
And he eats like one too!
I have my work cut out for me with this fella. He is waaaay to happy for everyones own good! He is like a bull in a China shop!
The Goofy guy! LOL