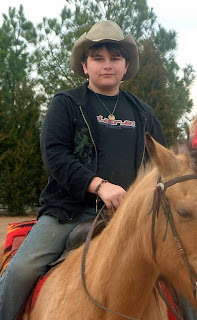 Growing up sometimes happens overnight and sometimes takes years. Some adults are still going through the process of growing up. Kyle seems to be in a hurry to be a man. He will need your help, and patience, as he finds his way. Teach him well to be a "gentle"man. He sure looks like a great cowboy! Sits a horse well!

That sounds like it was a really lovely day you two had. You are obviously really close to your family and get on really well with Kyle.

That is a lovely photo of him.

Darci, I hear where you are coming from. It is so wonderful to see them spread their wings and grow - then on the other hand you look back and think "what happened, where did it go?". My kids are 21, 17, 15, 13 & 10. One out of the nest and four more to go. My sons amaze me every day with their new thoughts, opinions and actics. They are becoming little men right before my eyes. I was almost brought to tears by a memory a few days ago. I remembered the last time my 17 y/o son reached for and held my hand. He was 11...now he is to grown up for that kind of nonsense (as he calls it). My daughter is out of the house already and I pray for her every day - that just a smidgen of the common sense I tried to teach her stuck to her brain. My biggest concern is that, did I do my job well enough? Did I teach them what I should?

You are so right to cherish those days like you spent with Kyle, the older they get, as you know, they evolve into something altogether different.