A prime example of the Ramblings of 1Sheep Dog Gal 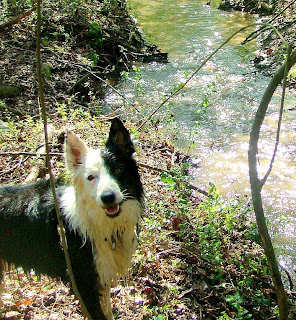 Here is an excerpt from Bill Berhow taken from the book Top Trainers Talk about Starting a Sheepdog. I have had this book for quite awhile now, but have never gotten into it enough to read it cover to cover. It sits in my bathroom, and I pick it up from time to time while I'm in there and.....have a minuet to spare. I know, TMI! LOL.
Anyway, this really hit home for me, as Chris and I really struggle to keep our heads together when confronted with sheep. She/we have made progress, no doubt, but we still struggle with having the correct mindset when sheep are in the picture.

"If I see a dog that looses its head easily, that tells me I have to be very careful in the way I approach it. I don't want to put it in over its head or get it into the habit of working over its head. If dogs get into a pattern of working when their minds are chaotic, that can be a problem that's difficult to get rid of. But I also don't want to keep the dog from that chaos by control. I want to put them in situations that allow them to get over it on their own. If I'm controlling the chaos, that chaos is still in the dog- all its going to know is how to stop or go right or go left when it is told, but its not going to know how to settle its own mind, unless its learned to do that, and that's not some thing I can teach it to do- the sheep have to teach them that, and its probably one of the harder things to get through to them."

(There are no doubt and number of you reading this that are saying to yourselves: "That's what Ive been trying to tell you all along!" While banging your head on the desk! I know. But some how, this little paragraph, just sunk it all in for me.)

So, lets break this down.
Chris looses her head easily.
Why?
Because to many times as a young dog, and even now I think, Ive put her in way over her head.
Was I careful?
No.
Did I control the chaos?
Yes. (to the best of my ability)
Has it been hard to teach her to settle her mind?
Absofreakinlutly!
Is it one of the harder things to get through to her.
I strongly concur.
Has she gotten into a pattern of working when her mind is chaotic?
Um, yea.
Can I/we break this pattern?
This is a question I have been struggling a lot with recently, and I am still unsure as to how I feel about continuing the struggle. For Chris AND for myself. Some times I wonder, should we continue? When is enough, enough? When do you finally say she knows enough to get a job done. There are certainly situations where I would use another dog other than Chris, but there are a majority of the times I will grab her first for a job. If she were my only dog, would I keep going with her? Or, is having other dogs that can do a task I'm unwilling to completely trust her with allowing me to become lazy with her training?
Being sick and inactive this last week hasn't been a good thing for me. It gives me to much time to sit around and think, dwell on things. ( its also given me more time in the bathroom to read) I look at my dogs, and I think about them. How are we progressing? Are we progressing? Should I expect more progress, or are we at a stalemate?
I have been able to bring myself to the conclusion, that Chris and I will never make it onto a trial Field, and that is a sad conclusion to have to settle on. She could be so much more with a different handler. She has the makings of a great dog. It has been brought to my attention, that there are others that could get her around a course, and even be competitive and successful, but it will never be she and I together that get to enjoy that thrill. Id always had such high hope for Chris and I. Alas, I created to many problems early on, that for her and I seem insurmountable. Do those points make her any less in my eyes. Hell NO! It just means that at some point, I have to look at my training goals, and perhaps change some of the reasons I am training with her.
She really deserved more in the way of a better more intuitive trainer. One that was more learnered in the ways of handling, and I really loved this description of her that was noted by a friend as a; "classic, hard, pushy farm bitch. A dog that can start working right out of the box and is useful in a variety of situations with no fuss." Yep, that would be my Chris, fits her to a Tee. But that is not the type of dog, best suited to my handling abilities and temperament. Chris is what we would call in horses, "bred hot." I got an Arab when what I needed was a draught horse. I started putting to much to soon on Chis as a consequence of her ability to start working "right out of the box" I saw all that raw talent and natural ability as a 4 month old pup and couldn't wait to get going with it, and didn't nurture it, but instead, put her in way over her head countless times. And so for that, I have a dog that's mind when on sheep, tends to run to the chaotic side, which in turn, then turns my mind to mush. Makes me want to control, stop the action, instead of help her through it and go on.
Chris and I have been working on our issues for a little over a solid year now. I have sank a considerable amount of time, energy and money into it. We have come so far from where we started. Due in large part to a couple of very good friends who can see Chris's strengths and potential and my weaknesses and they have faith in my good little dog. I have learned a little about faith throughout this process, and I will now put her in working situations that a year ago Id have never even entertained the thought of. But still, there are those times I will take Lex or even and especially Bear over Chris to do a job, simply because I know how the outcome would be if I put her in a particular type of situation. I do not begrudge the time, energy or money I have spent in working with Chris, I adore this little dog, and take great pride in her, and really enjoy working with her, in most situations, and in fact, am willing to contribute even more. But when we have reached a stalemate, and progression seems to be at a stand still, when do you say that good is good enough?
Posted by Darci

I had a time with Lucy this past weekend that really made me ask some of the same questions. By the time I got home, I thought I should sell her to a farm home. She would really like that, and I wouldn't be yelling at her. Then, I dissected what actually had happened. I gave her commands she wasn't clear on. I got angry and made her work twice as hard as a good handler would have, and I didn't give her any credit. I just saw what we failed at. It's something I usually don't do. I am the Pollyanna of dog training after all.

Later that day, she lay in bed next to me. So proud of the work she did for me- well, we don't knowt that for sure, but we know she was content- as her sighs and moans demonstrated. Then I realized it. That what we are in it for is the journey. There is no "place" we are going. We are going where we go, that's just it. Chris may be your dog that won't be on the open field, but will be that one special dog that brings out more from you than you thought you had, and reminds you that it ain't about winning, or looking good, it's about team work. Where one is weak, the other picks up the slack.

The big question is do you enjoy working her? I have a similiar question in my mind with my red dog, Dusty albeit for opposite reasons. He lacks confidence and gives up when things go wrong....which can be pretty often on a trial field. But I LOVE working him and he makes an awesome chore dog. I don't have 'chores' per se for him...but he is a great set out dog at trials which saves my Open dog and once he knows what the job is, he does it with little direction from me. He is kind to sheep and will never get in trouble. He is useful when I help friends sorting or worming, he is a good dog. I love him for who he is and don't expect more than he can give.

I agree with walk on border collies. It's all about you enjoying working her.