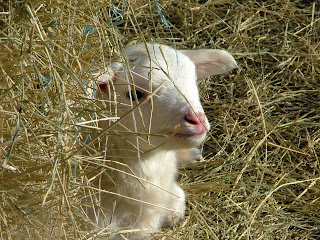 For not having any work today, and not finding that out until Id actually gotten up early, showered, didn't get my regular quota of coffee, and then drove all the way to town before I found that out, it ended up still being a pretty cool day.
I hung out at work since I was there anyway for a bit, hoping the phone might ring, but knowing it wouldn't, who wants to get their dog groomed when its muddy and raining?? Must just be Me! And since I had Bear and Cain with me, I decided to go ahead and bathe (that's for you Julie! LOL) them, and I was glad I did! The dirt just ran off them! Cant imagine how they get so dirty! 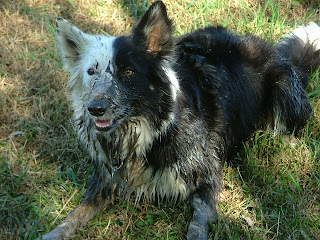 Anyway, I got back home, and loaded a bunch of junk and trash into the bed of the truck, took it to the trash dump, and by the time I was done there it was about time to pick up Kyle from school. He likes it when I can, it beats the hell out of the two hour bus ride home.
While we were headed home, Kyle said he would enjoy taking the dogs for a walk down at the Raven Rock Park. Its on the way home, so I thought what the hey! And then I thought Hey! Ive got Bear and Cain with me! I just washed them! Oh well, how dirty can they get at the end of a leash on groomed walking trails. Well, don't ask! They are worse than a couple of toddlers playing in the mud! The woods were muddy and the trails were slick, but we still enjoyed the walk, the boys just rode home in the back of the truck instead of their customary backseat.
While we were in the woods walking for a bit, we decided to stop and take a break for a few minuets. We found ourselves in the middle of a thick grove of trees, mostly pines. Poor Raven Rock Parks trees, have been ravaged over the years from fire, flooding and high winds, and there is a lot of dead fall and leaning trees. We'd been sitting there a few minuets when I heard a strange popping sound. Immediately, I accused Kyle of farting. He looked at me with shock and awe, and proceeded to let me know under no uncertain terms that it wasn't him. As we sat there listening a little longer, we realized that the sounds we were hearing were coming from the trees! The trees are very tall, and a lot of them are dead and dying, and the little bit of wind that was blowing, was making them sound off. Popping and creaking were only a few of the sounds we heard. The trees were making so many sounds, especially as the wind picked up, that we were able to start putting names to the sounds we were hearing. Some were akin to the sounds of the creaking of a rocking chair, others were like the eerie drawn out squeaking of a screen door like you'd hear in a scary movie, slowly opening. Maybe Ive got sheep on the brain, but I even heard one that sounded like the baaing of a lamb! By the time all the trees got going, we were hard pressed to put a finger on exactly what it all sounded like, and then it hit me. The trees sounded like the songs of the Humpback Whale! I wish Id have had a recorder with me, it was beautiful! Moans and groans, and high pitched squeals, clicks and wails. What a symphony! It was difficult for us to drag ourselves away. But alas, all good things must come to an end, and as the wind died down, so did the singing of the trees. Just think, had we not decided to take a break and simply kept on walking, we'd have never gotten to enjoy Mother Nature at her finest. Kinda made me feel sorry for all the runners we passed along the way, all going to fast to enjoy the little things.
When we got home, I got Bear and Cain out of the back of the truck, and Bear bounded out to the sheep pasture gate. All aglow in mud and muck from having way to much fun on our walk. He was ever so sweetly looking at me and you could just see the hope written all over his face. Could we,..... pleeeeeease go work the sheep???? Still retaining my jovial mood that the singing trees had embedded in me, how could I deny such an obvious and honest attempt at communication. Yes, I caved.
And glad to have! Ive been a bit concerned of late about Bear's and my relationship. He works fine for me, and he respects me, dare I say, in most respects I feel he loves me, but Ive had him since October, and I just wasn't feeling a strong bond between us yet. Well, to be more honest, its been seeming as if I liked, loved and appreciated him way more than he did me. He still retained a bit of an aloofness some times, and it bothered me. Of course, I'm use to the fawning and needy "I JUST LOVE YOU SOOOOO MUCH EVERY SECOND OF EVERY DAY!" personalities of Lexy and Chris, so I had just about put my worries on a shelf, and thought maybe that's just who Bear is.
Today, Bear and I found that bond. I cant say how, or why, and I couldn't begin to describe it. Its just a new feeling we shared. One of accomplishment, team work, and trust. A meeting of the minds. Alot closer to the oneness Ive enjoyed over the years with Lexy. It was, as Bear has a way of making me feel, liberating, and exhilarating, as well as consoling. Today, I KNOW my dog loves me. Today we broke through some invisible barrier, and I KNOW Bear wants to work for ME because he loves to work with and be with me. 3 words. Way to Cool! 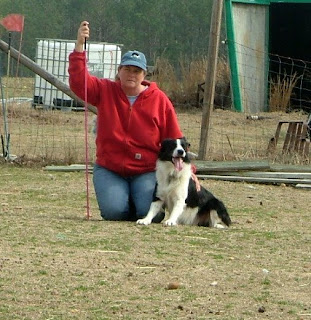 After the wonderful work Bear and I had, I though we just might be on a roll, so I then got Chris out and took her for a spin. Sunday during lessons, Robin had given me a few more tools for my tool box and they are working well for Chris and I, and so we had a lovely work, and she did some very beautiful 250 yard outruns for me. Ive NEVER trusted Chris to outrun that far without me between her and the sheep. I think I may just start. Her lifts and fetches were still a bit to fast, ( we'd be screwed coming down the hill at Soldier Hollow fetching like that! LOL) and she really needs to learn to pace herself a little better but that wasn't what I had set out today to work on, so I didn't push that to much. I am very pleased that we appear to be back making progress again. One day this good little dog and I are going to get all our ducks together in a row, and then its gonna be watch out people cause Chris is gonna stir things up! 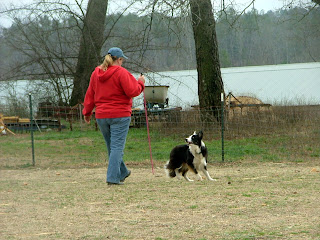 The day wouldn't have been complete leaving Hank in the kennel, and he and Julie did a nice job in the round pen on Sunday so I thought Id try my hand seeing what he retained from his work with Julie. The round pen is one thing, but here I have to work in a 2 1/2 acre field, and ya really gotta set things up and be on your game with Hank as he can be a bit rowdy. Again, it was lovely. He is circling and changing his sides, and fetching nicely. Oh! And stopping! Not only is he stopping, but laying down! He is finally getting it, and at 11 months, that's all I ask. He was very pleased with himself, and I don't blame him. Still, I'm not going to work him much, maybe a couple times a month for now. He is still quite immature, and goofy. He hasn't grown into his rather large body yet, and grace escapes him. But I give him an A for effort and team work. 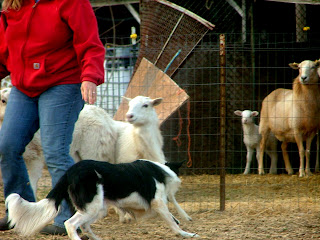 So even though the day started out not to be looking so great, it sure did shape up into one hell of a good time! Just wish I could have gotten paid for all that fun, but in a way, depending on how ya look at it, maybe I did!
Posted by Darci

It sounds like you had an amazing day, Darci! So glad to hear about the nice bond you're building with Bear :)

First, I LOVE Hank's tail!!!
I liked your discussion on each dog- they are all so different- you will be a very good trainer for it.
Sounds like a great day!

I have tagged you to do a name game.

It is harder than you first think..hehe