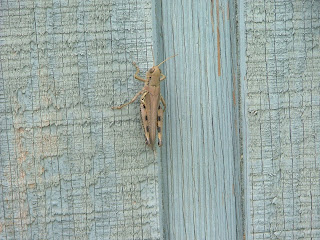 Of grasshoppers! They are everywhere! I cant even walk out my door, and they hop all over me! How gross is that! They freak me out. If I pick some thing up in the yard, its covered in grasshoppers. If I walk through the yard, I'm covered in grasshoppers. The dogs are having a grand time making sport of them, chasing them, and eating them. Don't know how good they are for them, but I hear they are great fried and covered in chocolate. They are on my porch, and every time I open the door, they hop on in like they are welcome.
Last night, I was sitting on the couch reading, and one jumped on my arm. Talk about scream like a girl, and jump like my ass was on fire! I can move a lot faster than I thought I could.
Kyle has a soft spot for these bugs. I think because I am determined to stomp everyone that I can, and he gets a kick out of watching the dogs stalk and pounce on them, and really finds it grotesquely fun to watch them eat them. But more over, really in a sadistic way, he enjoys seeing me freak out about them when they jump on me. True to his boyish nature, he enjoys catching one and pretending he is going to throw it on me. he especially enjoys pretending he is going to throw one in my hair, which he has seen what happens when one does land on my head, and it ain't pretty. I should have him call his older brother and let him tell him of the episode when Luke threw a dead snake at me one day while unloading some hay, and then when I jumped/fell off the truck load of hay, proceeded in chasing me around the barn with the dead snake. It was the first and last time the boy did that to his mother. When I find a grasshopper in the house, Kyle has made it his job to humanely catch it and deposit it back out side. ( or better yet, call one of the dogs over and show it to them, so he can watch the hunt) I am sick of these grasshoppers but there are so may of them, I don't know how I could eradicate them. Maybe I could borrow a tribe of meerkats from the zoo. Every time I see them on TV they look as though they are thoroughly enjoying eating some sumptuous bug. They'd get fat real quick if they were here!
So at this point, I'm not safe from these things anywhere. I'm afraid to go outside, its hot and I like to wear shorts and when they jump on my legs, it really creeps me out. Obviously, I'm not even safe in my house, and I walk around like a paranoid prey animal looking for the predators. Not that I have to look far. They seem to be immune to bug spray. I liberally cover myself with the stuff before I go out side, but it doesn't seem to deter them. Matter of fact it may even be/ seems to be, luring them in! I am by no means a girlie girl, that shrieks at the sight of a spider or a mouse, its just that they jump on ya with out asking first, they are impolite, and I don't like that. Personally, if I were them, Id have a better sense of self preservation when it came to jumping on me, cause after my initial shock, of having them jump on me, you can be sure that I will hunt down the offender, and squish it into the ground. Just ask Luke!
Posted by Darci