Rolling right on along 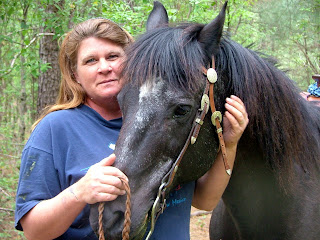 Well, I spect its time to do a little updating.
I still miss my Cain incredibly. I keep looking for him to be there and he's not. Old habits die hard. He has left a big space, that, try as they may, none of the other dogs are able to fill. And they are trying hard. I try too, but still, they offer themselves, and they aren't Cain. Bear tries the hardest. He always wanted the coveted Cain spot anyway right from the start, so naturally, he is spending more alone time with me than the others. Its working to our advantage, as our bond is stronger than ever, but still, I doubt that many would take him seriously if I left him tied in the truck bed and he popped up and barked at some one for not giving my truck a wide enough berth. I think the biggest difference between Cain and the other dogs, is that Cain always looked after me, while the collies look up to me. Cain and I were equals, pards. Cain had but one agenda in life, and that was to take care of me and mine, to serve and protect, the collies agenda is much different. Not a bad thing, just an observation. In time, I'm sure I will get use to him not being here, but I'll never forget all that he gave of himself to me. He was a grand dog in all ways.

So what have I been up to? Why working dogs of course!
I recently got a new phone, and I'm loving it. Its called a Smart Phone, and boy is it ever! Does everything but the dishes, though to be quite honest, Id gladly give up the Blue tooth if it would at least just do the pots and pans.

With Chris, we have just been working on what she knows and trying to tune a few things. I have a few issues I want to work on with her, but my truck broke down, and it was in the shop last week when I should have been at lessons with Robin, so I wasn't able to address them, and will hold off doing anything about it, other than to keep her correct on what she is doing until we are able to get back working with Robin. Mostly with her, its a chore just to keep her from hurting herself while playing ball, she is so athletic, the way she twists and turns, leaps and ducks and dives, and is so intense while playing, she will go to great lengths to get the ball, and each time I watch her slide ass over tea kettle across the lawn I old my breath, and hope for the best. Silly girl.
Her coat is finally coming in nice and plush, which means she is getting ready to come back into season. I'm watching her and the other dogs closely now, as the boys will give me a good idea of when she starts to come in.
So far, there are more than enough people on a waiting list for pups, from the eagerly awaited breeding to Robin's Zac. I only hope we have enough pups to go around. So far if memory serves me correctly, there are 7 committed people on the puppy list, and that's a good number. I think we are all very excited to get our hands on some Zac/Chris puppies. Me, I could easily skip the puppy period, and would prefer if she'd just pop me out about a 7 month old pup! LOL

Hank is doing well. He is gun ho, and is taking direction nicely. Very keen and is starting to understand the partnering process. He can be quite bright some times, and yet there are times when he is just dumb as a rock. He could stand to grow up some more. I'm not doing much with him at this stage, just taking him about once a week to sheep, and letting him work. He is liking that, and has some nice natural talent and ability. Though I can already see he has his mothers wideness and I'm going to have to watch myself so that I don't push him out while trying to help him learn to read his sheep better. One thing I really like about Hank, is that all sheep are to be worked and kept together. Whereas Chris and Bear still ignore the lambs, Hank doesn't leave a single sheep behind, big or small, he gets them all. He will make a nice working dog when he is grown, he tries real hard, and wants to do the right thing, has intensity and focus and good listening skills, and loves to work. Not to mention, I am beginning to think he is inexhaustible!

With Bear, because my lambs are now 4 months old, and he is still ignoring them, its going to be his job to help me all this week, separate out the ewes and rams from the lambs, put them in the holding pen, and work only the lambs. By golly, if he wants to work, he will work the damn lambs and only the lambs till he gets it through his head that lambs are sheep too. It is very frustrating to see him ignore the lambs and walk right past them, and they are getting the idea that they can just either stand there and not be worked, or they can squirt off to the side and he will let them. Ive got a good look back on him now, ( thanks in large part to the lamb factor) and we are doing well with the driving work. Bear loves to drive, seems he is a natural at it. Ive gotten him to where is is able to start taking half flanks, and he is looking nice. He has a lot of talent and natural ability, is very keen, and intense, stylish, and has the greatest work ethic. His listening skills are second to none, and he loves working with me. This dog might well be the one to take me to Open, so I'm being very careful that we do everything right, and that I don't take anything away from him, and only continue to add to his confidence and ability. As much as I enjoy working Chris, she really is so much fun to work, I really enjoy working with Bear more. Actually, to put it better, I enjoy "working" with Chris, she will get the job done at any cost, training with her can be a frustration, but I really enjoy the training that I'm putting into Bear. Although I couldn't comment on his frustration level when working with me! LOL
I started putting whistles on Bear this past weekend. He is willing, and listening well, and so far we are just working on a stop whistle and a walk up whistle. When one starts to put whistles on their dog, it really brings home the fact that you have to be close to a hundred percent on pitch and length and velocity of your whistle command, or in the learning process, it is easy to muddle the dog and they will start to ignore the whistle if it doesn't make sense and sound close to what you praised them for when they got it the first time. Note to self, keep practicing in the truck, cause really Darc, you know you suck!
The reason I mentioned the new phone, is because it has a camera on it, and I have been enjoying that little feature. Its rather cumbersome to bring out the digital camera and try to get shots of the dogs working while you have a big camera stuck in your face. Most times all I can get are nice pics of the dogs fetching the sheep to me. But! With this new phone, I am able to take pics from anywhere! I have already taken a number of pics of Chris and Bear with it, now, if I could only figure out how to get them on my Picasa, so I can share them. I guess since what I have already tried hasn't worked, I'm going to have to pull out the Epic Novel that came with the darn thing and actually read it. The instruction manual, I shit you not, is a good half an inch thick, and it is only written, (can you believe it!) in English! It also has a camcorder on it but I'm not sure about the length of time it actually films, so maybe a good boring manual read is in order anyway. Video would be fun to get and post.
Outside of that, things are just rolling along around here, its getting warmer by the day, and the dogs are asking to go to the pond for a swim, but I'm having a very difficult time since Cain allowing them to go. I look over at it, and they look at me like can we go, and I just go get a ball and we play in the yard instead. I haven't been back to the creek, pond or the woods, and am going to have to get over the fear and take them. It just feels as if I'm setting them up for the fall if I take them. If one gets snake bit, it would be my fault I had them down there. Maybe I'll get them a pool.
Posted by Darci

You write so beautifully of Cain. What a loving tribute to him to be remembered so fondly.

Glad to see you are back writing again. You know how much I enjoy reading your blogs.

p.s. get them a pool! Don't take a chance on another snake bite! You'd never forgive yourself!