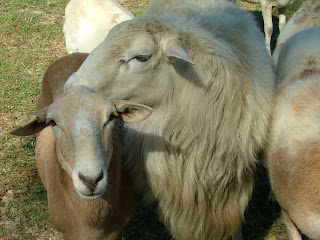 Well, its been an incredibly quiet weekend around the place. What with everyone once again snugly sequestered in their pastures and Jack happily going about the business of breeding his ewes, and the dogs settling in with the newcomer Bear.(this is Darci trying not to make a face :{ when she says the name) Its been nice to just hang out and enjoy the fall weather and see the changes that are taking place with the animals and the land. The trees aren't as spectacular as I'd hoped they'd be, mostly just shedding their leaves instead of changing colors. The pastures are starting to die out and its time to start setting out round bales again. The horses are starting to look a bit shaggy as they start to put on their winter coats and loose the slick glossy look of pasture fed fat and sassy horses. The sheep too are putting on the wool lately, and Jack looks magnificent with his long full mane adorning his shoulders and chest. How could any ewe not want to be associated with such a handsome fella! One of the nicest things I can appreciate about the fall around here, is that the bugs seem to have disappeared. No more grasshoppers, no more crickets and flys, AND! You can actually open your mouth and have a conversation and not have a hundred gnats flying in your mouth and around your face. (I still honor the theory that bug spray in this neck of the woods serves as an attractant instead of a deterrent.) The lawn mower has been put away, which ends another season of Ipod shake your groove thing mowing. I especially do enjoy mowing to the tunes while shutting out the world and mowing my name, or other things depending on how I'm feeling about the neighborhood at that time in the grass. The days are becoming shorter, so I'm having to re adjust my evening schedule for working dogs and feeding livestock. I did this summer enjoy it still being light at 9pm but the trade off to fall, is getting to work all dogs at 5pm and not half kill everyone, dogs and sheep due to the extreme summer humidity. Yesterday, I actually had to dig out a sweat shirt to be comfortable outside. We have closed off access to one of the pastures that the horses frequented, and are preparing that pasture for planting a winter feed on. I think Bobby said it was called Pearl Millet, but I also heard mention of Rye too. Seems last weekends little boot up the backside has spurred on incentive to get back to work on the place and get ready for winter. Though it could have happened anyway, without my intervention, however, I like to think I had some thing to do with it. Bobby and his bro Terry have been spotted this past week, with their heads together walking the pastures and talking about different types of forage and rotating pastures, to save $$ on hay. I dare not intrude on the master minds at work, lest it distract them from their serious discussions about animal nutrition. Which so far has amounted to numerous cell phone calls from them in the pastures to me in the house, with them asking "can the horses AND sheep eat X type of forage?" Not a good question to ask grown up out in the West me, as I'm still having a hard time adjusting to the fact that you cant grow pretty alfalfa hay in this sandy soil, and am still willing to give it a go. They say it wont happen. Oh well, I'll be happy with just about anything, as long as its not all talk and some thing animal edible actually does get planted. And soon I hope, as fall also brings about the Deer hunting season, and that is an easy distractor for those two. Buck fever is in the air, I can smell the testosterone all around. Men are frequenting the shop daily wanting their fav rifles that Bobby has been cleaning and sighting in and working on getting ready for them for "The Hunt". A phrase around here that Ive yet to conceive as particularly accurate. To sit in a tree and bait the deer and shoot them when they come to eat the corn, just doesn't feel sport man like to me, and as much as I enjoyed hunting back home, out here Ive yet to be able to gather up the incentive to climb a tree and sip coffee while waiting for the deer to come. I would imagine that for those that have never hunted any other way, that this seems normal and right, but I'm not of that mindset.
Another thing that fall brings, is the leaving of some birds and the coming of others. Ive been having an interesting time trying to learn all the different types of birds that frequent the place, and am sad to see some of them go. I was really enjoying the sounds of the geese as they frequented the ponds and filled the sky's with their V shaped honking nightly as they flew overhead. Ive been thinking of having Kyle build a few bird feeders, and finding out what types of foods the winter birds around here prefer, but am afraid that the neighbors feral cats would just have a hay day if I actually lured in prey for them. I guess the Death To Cats message that I mowed into the side yard this summer ( you;ll have to go back to earlier post "I don't hate cats" to understand that one) went un-noticed by my neighbor, as there still seem to be a wide variety of them wandering about.
Posted by Darci