What rhymes with Bear?? 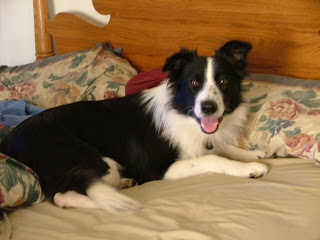 Well, we seem to have a new addition to the BC clan. His name is Bear, (yuck, I don't like the name) So put on your thinking caps, and help him find another name I can tag onto the front or back of Bear, so that I can start to phase out the name to change it. Bear is a little over a year old and semi started. He is a very sweet dog, and has a lovely biddable temperament. He is keen to work, and a very easy dog to handle. I had gone out and looked at him several weeks ago, but had to for a few personal reasons decide to pass on him. Well, I got a call the other day from the gal that was training him, asking if I could make an offer on him, and that any offer would be considered. Due to the economy at the moment, I told her I just couldn't afford to buy a dog at any price right now, and even though he was a nice little dog, I appreciated her thinking about me, but just couldn't expend the monies for another dog at the moment. By the end of our conversation, she had given me the dog and we were making arrangements on where to meet so she could deliver the dog to me that day. Amazing how things work out some times. I like Bear, he is a nice little dog. Very easy to be around, well mannered, and has a recall to die for. All the other dogs, after the initial pushing and shoving and establishing their places have accepted him and he them, and everyone is getting along pretty good. Hank has his nose a bit out of joint about him right now. He has been the baby around here, and is a bit of a Mamma's boy, so having another dog that wants to be Velcro on me has him very worried that I will love the new dog more than I love him. Dogs. Such emotional creatures. He does, in his defense, try to engage Bear in play, but Bear is just not into it yet. I can see though that he is starting to become a little interested in Hanks puppy antics, and am sure that in time Hank will win him over and have a new buddy to play with. Hank can be very persuasive and persistent. I worked Bear on sheep two times yesterday, and he did a nice job with what he knows. Again, he is a very easy dog to handle, has good balance, and reads his sheep well. He moves off pressure nicely and isn't wide at all. I didn't see any slicing and no gripping, so it looks as though we have some thing to work with albeit he is a bit slow just yet, but then, I'm use to working with quick Chris, so having a dog like Bear around may just be refreshing. He is house broke and has wonderful manners. What a wonderful gift. ( as opposed to some one Else's problems, which, has happened to me in the past) I am pleased that the folks that were in charge of Bear's placement would feel that I make an acceptable home for Bear. That says a lot and makes me feel good. So, I'm looking forward to working more with Bear, and getting to know him, though he pretty much has "bear ed" all insofar as who he is already. Just a fella that wants nothing more than to be loved, work sheep, and please me, and is eager and willing for all three. So, we welcome Bear into the pack, and look forward to seeing him develop his abilities.
Posted by Darci

why don't you just change his name to something that starts with a B, rather than something rhymes with Bear?

I like people names, and am open to suggestions, Im not very imaginative, and usually a name will just pop outta my mouth one day and sticks,but that hasnt happened yet, and as you know, Bart has already been taken.LOL

Nice looking boy! Sounds like he is going to be a good one. What about Tare? I am happy for you :)

Ben, Brock, Blake, Brad, must be a ton of them to pick from.

Check here for some ideas:
http://www.bcdb.info/index.htm

Thanks Robin I'll check it out toot sweet. Id thought there would be a gazillion names to choose from too, but for some reason, Im drawing a blank. Maybe this link will provide some choices. I really like Ben, and have always liked the name but in lieu of Becca just loosing her Ben, Im hesitant.

Thanks Julie, we've been through all the rhyming names, and nothing is really striking a cord with me yet, I like people names for my dogs, so will be looking towards some thing like that. Robin sent me a link Im gonna check out, maybe that will yeild some thing that i will find catchy. Hope so, and soon, cause I tend to wince every time I call him Bear! LOL

Well, we'll put it to a vote and mess around with these few Ive picked out that I found acceptable from the link that Robin sent me.

I also saw the name Boner. WHO!!! Would name a dog Boner!!?? LOL
I really like Bowen for some odd reason, it really clicked for me. We'll see how he likes that one first. Thanks Robin, Id have never thunk of that one (or any of the above)on my own.

I like naming dogs after other dogs to honor them. I've done it several times. Jet and Bill are both named after good dogs Kent Kuykendall had that i admired.

Thanks you guys for all the helpful suggestions, but It looks like Bear would perfer to retain his name. We tried numerous ones with him yesterday, and he didnt pay a lick of attention to them, just kinda looked at us then around the room, like who you talking to??? Outside when called another name, it was even less of an
acknowledgment. So, it'll stay Bear. I'll just have to learn to quit making those faces when I say it! LOL

he came with that name and it fits him

Thanks for the suggestion Diane. I think we are gonna stick with the name Bear, he seems to like it, and its starting to get easier for me to say it without making all those faces.LOL

Not bad article, but I really miss that you didn't express your opinion, but ok you just have different approach

You have tested it and writing form your personal experience or you find some information online?

Here is my blog post: how to win the lottery

Hi there, everything is going sound here and ofcourse every one is sharing facts, that's truly good, keep up writing.

For most recent news you have to pay a visit world wide web and on internet I found this web site as a best
site for hottest updates.

Greetings! This is my first visit to your blog! We are a team of volunteers and
starting a new project in a community in the same niche.

Your blog provided us valuable information to work on.
You have done a wonderful job!

Do you need a loan?

Welcome to Mr Michael David Loan Company...we issued any type of loans to
Applicant who is in need of an urgent loan financial assistance and to whom the bank denied them from having credit and we are legally backed by the government. I must tell you,That in this company we give maximum satisfaction you can ever desire. All that is required of you as a borrower is genuine
information about yourself, if you are interested in our ads.