Shakin' but not stirred. A recipe and a question. 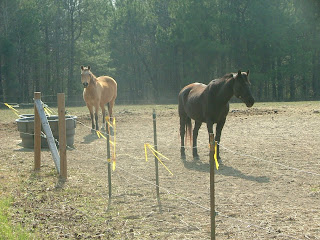 Has to be one of the best blog entries I have read. I think the title should be: For the wont of a fence, the animals were lost- temporarily; an essay on man's laziness.

Ha! Thanks. The DH however, could be designated his own blog filled with entries on how loath he can be these days when it comes to fence work. His alergies to the tractor have gotten worse as well, and I havent found a pill at the drugstore that will counteract that little problem either. But, as soon as he was able to pull my boot outta his backside yesterday, the fence did in fact get fixed, the tree chain sawed down, the tractor was brought out and the bush hog and weedeater were put into effect. And for the moment, all is well again in my little world.