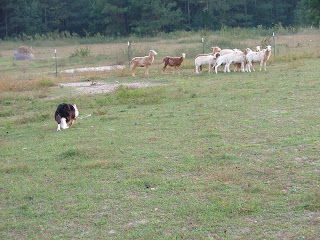 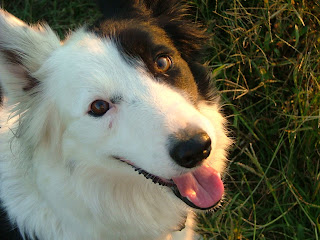 I started Chris tonight on whistles. I am, under no uncertain terms, nothing less than amazed and impressed. I started off with a simple stop whistle. After asking her to walk up on the sheep, I then asked her to lie down, and gave her the whistle. I only did this two times, left out the verbal and just gave the whistle the third time just to see if she was listening and if perhaps she would at least hesitate. Imagine my surprise when she dropped right into a down just as I gave the stop whistle. I thought, OK a fluke? We'll try again. Asked her to walk up, also giving what I want to be a walk up whistle, but not really pushing that, and then gave the stop whistle. Again, immediate stop. Hmmmmm. Interesting. OK lets take it a step further, because she seems to be enjoying this new learning experience. I gave a walk up whistle, and sure enough, she started to walk up. I let her walk up on the sheep about 20 feet and gave the stop. Boom, she hit the ground. Cool! We did a little more work, and I tried the stop while she was in more motion, and had to whistle and then ask and then whistle again, but she is getting it. Cant ask to much all at once. I was happy just to get a stop. Even if it was at the moment while she is moving slow. Its a start! On another note. I have been working Chris every night now for almost two weeks,(I'm loving this cool weather!) and I have to say that she is finally starting to engage her brain "before" we get to the pasture gate, instead of getting all stupid and going in there acting like she'll just die if she doesn't get to the sheep. This has been a hard one for her to manage in the past, and she has really improved. Transformations in Chris over the last 6 months have been monumental, and I just love working with this Little dog. Everyday we get more and more in tune with each other and the journey has been nothing short of inspiring and gratifying.
Going to have to find another whistle though. I'm using a Montana light, and I like the sound and range it allows me, but after using it more than I ever have at a stretch, my mouth is a bit sore. Id thought it was a relatively small whistle as whistles go, and already tossed a half moon because it was to big. So I'm looking into the Baby Blaster. I found one for 22.00 dollars on a UK site, as opposed to the 40 dollar ones I found on USA sites and even with shipping it will only come to 26 bucks, but it says it has a flute like sound. Not sure Id like that. But, I spect I'll probably have a small investment in whistles till I find the right one.
Posted by Darci

Let me know what you think about the baby blaster, OK? It's one of the ones I've been drooling over. ;) Glad Chris is responding well. Nick seems to be also.