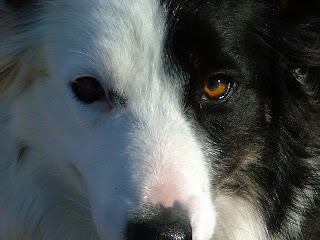 For as long as I can remember, every Thanksgiving I have tried to duplicate my mothers recipe for Candied Yams. Without fail, I have miserably failed. Until this year! How do I attribute my successes for this year? Sheepdog training!
Today while everything from the Bird to the taters boiling for smashed potatoes were cooking, I found I had a little time to go outside and enjoy the beautiful warm weather we were having. As much as I enjoy cooking Thanksgiving Dinner, it was getting hot in my little kitchen and the sun shining through the windows was beckoning to me. I looked at the clock and decided I had a half and hour to sneak away from the kitchen. Since it was a Holiday I had decided to treat the dogs, and allowed them all, yes, all six of them to hang with me in the kitchen while I cooked. Well, actually, I just allowed them all free reign of the house, but of course, the kitchen with me is where they all ended up staying. I'm sure it had some thing to do with the fact that they were hoping for handouts and hoovering opportunities just in case I spilled or dropped some thing on the floor. I'll bet there are a couple of them that wish they had docked tails, as I kept stepping on them while trying to move about in my small over crowded kitchen. So I called them all to come outside with me and thought we'd just get a good game of fetch going, but as soon as I got out there, I though how nice it would be just to let the dogs work a bit instead. I had no intended plans, no training to achieve today, just a little simple work to let them blow off some steam, and have some fun. I took Chris first, and everything was quiet and mellow. I was in a zen state. All was right in my world. I was off work, Kyle had been helpful in the kitchen and had made 2 pumpkin pies and a batch of brownies and peeled the taters for me, and we had fun doing that together. DH was sitting some where on the back 40 in a tree stand waiting for a deer to wander in, everything in the kitchen was going well,(meaning I hadn't burned anything yet) and now, here I was outside with the sheep on a beautiful warm November day working my dogs. My approach to the work was not rushed, I had no agenda, and I was calm and quiet with the dogs. It was lovely. Chris was the most relaxed I think Ive ever seen her, and couldn't put a foot wrong, and if she did, it really wasn't that big a deal to get all uppity with her about anyway. We were just out there to have some fun. Next I ran Bear. I did do a little work with him on walking out with me, but as I lay him down on the field for a small outrun, I turned and faced him as I walked backwards away from him, quietly and calmly repeating lie down, liiiieee dooowwwn. It was the first time he didn't try to cheat me and get up and go after the sheep before I sent him. Do I think this was progress? Maybe. But mostly I think it had everything to do with "my" state of mind, and that my happy, calm and unrushed demeanor had translated to the dogs. Bear got a little work in and it was pretty. As I walked off the field and into the yard, I called "That'll do" and was quickly surrounded by happy wagging tails and slobbery smiles and we all went back into the house to make the candied yams. Every year on Thanksgiving, I call my mom and ask her the same question. Tell me how to make the yams, and every year she says she doesn't have a recipe, and follows with, "I just make them." "Use a stick of butter some brown sugar and put it in the pan and cook it." Every year I do that, and every year they turn out like crap. Well, not that bad, but not like moms. This year I didn't call mom, I just went inside still ridding on the calm and unhurried composure I had come off the field with and I finally figured out the secret for the yams. Even though Id always had the right ingredients in the past, I was always missing one thing. Tempered patience. Just like I use to work the dogs, hurried and un even tempered, I cooked the yams the same way. Always in a hurry to see results. In working with Chris, such a high strung girl, Ive had to learn to be calm and patient, tempered. So when I finally did call mom tonight to wish her a Happy Thanksgiving and excitedly tell her Id finally figured out the secret of how to make the yams, well, I could hardly tell her that Id learned the secret to making the perfect candied yams through working dogs. So when she asked me how I did it, I simply said, Patience. I am thankful for many things, not just today on Thanksgiving, but every day. Thankful for friends, my children and grandchildren, family, life, health. But on days like today, I'm reminded of how thankful I am for my dogs. Loving and kind creatures, who always forgive my bumblings, and teach me so much that carries so much further beyond our home field. Who'd have ever thought that a dog could teach me how not to burn the butter!
Posted by Darci

Awww, now I'm all sniffly!! That's good stuff Darci - glad your happy zen place was useful out in the field AND in the kitchen!! Happy Thanksgiving girl!

Sounds like a great turkey day! Love the Chris pic, btw. Had to look twice!

Hey Laura! Thanks, and I hope you guys had a great day too!
And Robin, thats exactly what I did the first time I saw Zac's pic, I had to look twice to! LOL They sure do resemble each other dont they! I liked that pic of Zac so much, Ive tried to duplicate it with Chris, we got close anyway. Still, she doesnt have quite the lovely expressive eyes that Zac does.