Head for the Hills! 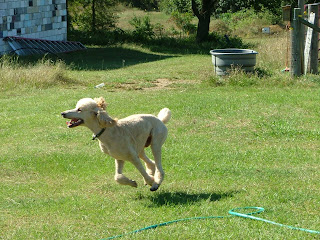 Oh boy, are you guys ever in for it! Do people still say that nowadays? I know that's what my brothers and I use to say to each other when we were kids when one or the other of us were gonna be in hot water with the parents. It was like a bad omen to hear it, coming off the lips of the one who "wasn't" going to be in trouble, usually followed by a sly and all knowing grin. Scary words those were. Not so scary today though, as "in for it" holds a slightly different meaning. My meaning today is that I just picked up batteries for my camera. BUT! Not just any old batteries, Rechargeable Batteries!! It took me awhile to find my charger, seems if you lay some thing down for more than a month around here, it ends up in the scary dark abyss that is my sons room. His excuse is, "Well, it was laying around for over a month and no one was using it!" So, borrow it, and put it back! Asking would have been a thoughtful gesture as well. It scares me when things go into Kyle's room. Some things never make it back out. And those things that do, are not always in one piece anymore, IF, and that's a big IF he can find them in a timely manner at all before I loose my temper and go in there and start cleaning. I have what is called a gobble sack. All my children know what the gobble sack is, and the smart ones fear the gobble sack. Things go into the gobble sack never to be seen again. Quite like Kyle's room. So he should understand the theory. What I really find amusing, is that my daughter who now has 3 children of her own has adopted the gobble sack idea with her children, and I just find that humorous, as she had always said she wouldn't be like me when it came to raising HER kids. Ha! I guess some things really did make a lasting impression. Anyway, I digress, I could write chapters about the day to day life with a 13 year old boy, especially this one! Not to mention the raising of the other two who now are respectfully 28 and 25 yrs, and raising kids of their own, and doing it, not unlike like they were raised. Funny how things go full circle.
But, to get back on topic. I had been using batteries that Bobby was getting from his work, and he was getting a little annoyed that I kept ransacking his stash, (kinda make ya wonder where Kyle got that not asking before borrowing thing?) And so he found a new hiding place for his sacred stash of batteries which forced me to go buy my own. Ive learned from experience, that the cheap batteries that I was....stealing, OK, I admit it, it was stealing, but hey! We are married! Whats his is mine right!? Anyway, those cheepo batteries werent worth a crapo, and wouldn't hardly last through 2 photo sessions before they died on me. Leaving me with Oh so many missed Kodak moments. So while shopping for Halloween candy yesterday, I saw this big glowing display of batteries in the Super WalMart that immediatly drew me to it like a moth to a flame. My eyes, (and hands) fell on the really good rechargeable ones, and I couldn't get them in my cart fast enough! Why hadn't I thought of this before? Was I getting to much pleasure from sneaking Bobby's batteries? I think that may have been the case. I did, mind you, put them back when I was done with them, albeit, used up and dead, but I guess that little courtesy didn't matter much to him. The old grump.
So now, I have these new rechargeable batteries, and I put them in my camera. All excited to get to taking pictures, and guess what??!! The damn things don't work! Ive got Diva's and dogs lined up eagerly awaiting their photo shoots, and dead batteries! Hence, having to venture into my sons room to find my charger. Just opening his bedroom door, and peeking in was giving me pause to think about picking the lock where the grumpy selfish husband was keeping his new stash of batteries hid. But, I persevered, and dove in and at last we found the charger. Then of course, we had to find the charger cord, which of course you know wouldst not be my good fortune to be WITH! the charger. Eventually, we found that too. It was no easy task. It was in a drawer, mixed in with all, and I do mean ALL the Nintendo, PSP, X Box, cords, chargers and anything else slightly resembling a cord and frustratingly intertwined into a mass of what resembled a pile of mating black snakes! (insert sarcasm here,) Oh goodie.
So guess who got to untangle all the cords for 30 minutes until my poor charger cord was released from the black tangled mass. No, you think me? NOT! It probably would have been easier to do it myself, but I was to busy with the gobble sack!
So, to make a long story short, the batteries are now charging, and Boy are you guys in for it! Cause I'm going to be shooting shot after shot of anything and everything I find even remotely picturesque, and posting it here for your viewing pleasure. Scary isn't it?
Posted by Darci

OK, but be careful what you wish for! LOL. I just put it in the truck! God forbid we should resign ourselves to just snapping pics at home!