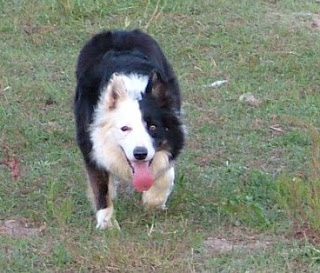 Last weekends lessons went well, and Chris and Bear learned a few things. I thought I did too, but some body forget to tell my sheep that we are a new and improved team! I don't think there is anything more frustrating for a handler trying to teach something, and the dog trying so hard to please when using inappropriate sheep for the lessons. Now mind you, my sheep are good sheep, and they are good to work, they just aren't that great to teach on. They are to quick to move off the slightest pressure from the dog, and they have some screwed up notion, that they should always be trying to stay just ahead of me instead of being right behind me. ( or in front of me as I'm always walking backwards) At first I thought it was because the dogs were trying to push them over top of me, but Ive not had a problem with Bear doing this and that's what we are trying to work on with Chris. Maybe its because the sheep are still a bit afraid of Chris, God knows in the past they have had plenty of reason to be. I don't think theres a one of them that doesn't have at least one scar or bad memory from an encounter with her. But you think they'd be a bit more forgiving as its been months since she has gripped or tried to maul one of them, and her work is so much more, um.....sheep friendly? Even if the dog is stopped, and I try to walk away to reposition myself, those damn sheep not only follow me, but try to lead the way!
Yesterday was a most excellent day to work the dogs, so out we went to try to get a little schooling in. I was all excited and had things all planned out as to how we would go about it. I didn't think I needed to have a conference with the sheep before hand, and ask their permission and beg their cooperation, but maybe I missed that chapter in sheep etiquette. As it turned out, they were most uncooperative,and we ended up not so much working on the new stuff, as just going over the old stuff, because we couldn't get the sheep to do what we needed them to do, or behave in the manner we needed them to behave to do the training. My first reaction to their insubordination, was to have a Blue Light Special in pasture #1. If Id have had a megaphone, I'm sure the neighbors would be having fresh lamb in their freezers today and at a very reduced rate! After doing a bit of work with Bear, trying to get him to stay put till I send him, and walking out on the field with a more team player like attitude, which were things we needed to work on anyway, and didn't have to bother the sheep to do, and allowing Chris to burn off some steam just working them, (she has been in heat, and has spent a lot more time in her crate then she has been happy about)I put the dogs up, and went back out to the pasture, and just sat and watched the sheep for a bit. I then decided that some where in my little mob, there is a ring leader. So I started to work them myself, and watch to see exactly who it is that is causing me and my dogs so much grief. Ive concluded that there are a couple of things going on. Two of my sweet little destined for the dinner plate gals are the culprits! One, will take her friends, and split off one way, while the other will take the rest in the opposite direction. Now this would be fantastic if we were out there trying to teach the shed, but we are not. So when I am on the field with them, is it any wonder that they are in 2 sets, one on one side and a bunch on my other, walking around me to end up together in front of me!
Lex use to have a working knowledge of how to shed, it wasn't always pretty, but we were able to get the sheep separated out, and whatever work needed to be done, done. So I got Lex out, and tried to separate out the troublemakers and put them in the catch pen. After about 10 minute, I realized Lex was confused and frustrated and had begun to work on her own, and we were no where closer to getting those sheep separated out than we would have been if Id have brought out my Std.Poodle to do the work. So, to end things on a good note for Lex, I had her do an outrun lift and fetch, and a little flanking and driving to get her back listening and feeling good about herself. I must start remembering to get Lex out once in a while, more often to do things, as she is really starting to slip in the listening department. At her age, it probably would be a good idea to get her hearing checked too, before I blame her solely for her indiscretions.
Needless to say, we didn't get those two separated out, yet. But it is on our list of things to do this week. I just need to think it through and figure out who I will use and how we will go about it, so that both dogs and sheep learn the right lessons. Or, maybe I'll just separate them out myself. Then, maybe we can see some progress and have a good session. Darn sheep! They really do keep things interesting, and I adore them one and all, but they sure can be a pain some times!
Posted by Darci

I can tell you, sheep that do that are no good for dogs- especially young dogs. Get them out of the group, when you are working on anything wherein the sheep are coming toward you. Mark their butts now, and grab a leg as soon as you can. Been down that road, and won't be travelling it again!

I know who they are, I have a small flock, and I raised every one of them so I know them as individuals. They will be in the catch pen one way or another before I take the dogs out to work from now on. The little buggars! LOL

That's really great that you stopped and thought about it and came up with a plan, good job. Now, one other thing you can try is go out there and make sure the sheep don't go past you - get defensive yourself and break them from trying to get around you. Practice your own heading and flanking and hold them between yourself and your dog. did you ever play basketball? Think of it as being on defense and trying to keep the offense from driving to the basket. Chances are what's happened is that you haven't worked your side of the sheep and they've figured out they can just run around you. You'll get some exercise but you're gonna have to MOVE to block them and break them from trying. If you can get the hang of it, it'll really help you down the road when you're ready to learn proper shedding. Good luck!
-Robin

I was thinking about that just this evening. Wondering if I should just bonk them darn sheep back into place. I think your right, I think I havent been holding up my end, and they have learned they can do that. I think more than anything that may just be what they need, is for me to be more defensive. Thanks Robin, you have justified my thoughts for me. I'll let cha know how it goes.

Well, I didn't want to elaborate, but... Yes, bop them in the front of their heads ;) Just enough to annoy them. They will learn to stop leaning into/past you. I am quite good at it :)