Working Bear,or As some would say, "The Other Hank!" LOL 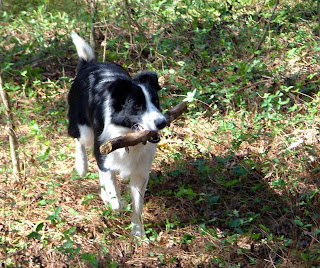 Saturday while at Robin's I worked Bear in the round pen. Granted, we are still learning to trust each other and getting it together as a team, and Ive found Bear to be extremely easy to work with and he has good instincts and reads his sheep well, so I was a bit concerned when the sheep got into a corner and he wouldn't go in and scoop them out.
Yesterday, I put all the sheep in the catch pen, but left out 3 of the (sorta) whether ram lambs. I wasn't out there to work on him getting the sheep out of a corner, but the opportunity did present itself as the lambs had never been worked by themselves until yesterday and there was a strong draw to the catch pen where the other sheep were and so they shot up there and hung in a corner at one point when Id called Bear back down to set up a small outrun. When I saw where the sheep had gone, of course I didn't send him, but instead we walked up to where the lambs were and I encouraged him to get in between the fence and lambs to pull them off the fence. I guess the pressure was to much for him, as he locked up and wouldn't go in. So I took him by the collar and walked in with him to help him out and show him that he could do it. I have been on the rail about a particular lamb for awhile now, and have been trying to figure out if I really want to put him in the freezer, or have a vet come out and finish what I started. Last spring, I purchased a Burdizzo. It is a device that crushes the cord that the testicles are attached to, and within a few weeks,the testicles shrink and disappear and the rams then become whethers instead of rams. My first burdizzo experience was about half successful. In other words, I got about half the ram lambs done correctly, and the other half are well,...still half a ram, meaning they still have one testicle. He is a beautiful lamb, and very much reminds me of his sire Jack, whom I think the world of as rams go. Hindsight makes me wish Id left him (fully) intact. He was one of the lambs I kept out for Bear to work. My thinking was if I could make him a nice schooling lamb, then I would be much more inclined to spend the money for the vet call to remove the other testicle. As I walked in with Bear to help get them out of the corner, that little stinker of a lamb, nailed my dog and ploughed him to the ground. I, and Bear were very unhappy about this turn of events. So I got the lambs out of the corner myself with Bear attempting to help, and we continued on with our original plan of just working on flanks and fetching. At one point, we were walking down the fence line with Bear covering the pressure nicely, but that darned ram lamb kept turning around and challenging Bear. First, stopping and facing Bear, then putting his head down and stomping his foot. The first few times this happened, it looked like it was going to be a stare off between Bear and the lamb, but the lamb decided to re join the group and not start the fight. Further down the fence line, he tried it again, and again, and had started to build enough confidence to start rushing Bear, and I was about tired of his antics threatening my dog and decided to let Bear show this lamb who was boss. To date, Ive never even seen Bear attempt to grip, gripping to me is a double edged sword and so have not yet encouraged it with Bear. If the dog has enough power, he is able to turn a sheep with their eye and body language. Bear is young, and not secure enough yet to understand his capabilities, and I didn't want this lamb to win, I wanted my dog to win. I said Bear's name to get him to listen at me for a second, and then encouraged him to get in there and teach that lamb who owned this field. At first, Bear was hesitant, and would walk up and almost be nose to nose with the lamb. I kept encouraging, and he finally went in and showed the lamb he was in fact in charge of where he would go and how he would behave with this particular dog. I wouldn't exactly call what Bear did, a grip. Matter of fact, I'm not even sure he ever actually did bite the lamb. I saw snapping teeth, and heard a low growl, but never actually saw a grip but he got in there and mixed it up enough to where he earned the respect of the randy little bastard, and our lesson then went on to be nice, fun, calm and successful for all concerned. The lamb learned respect for the dog, the dog gained some well needed confidence after being hit by the lamb, and I felt better knowing my dog now has another tool to utilize when all his other tactics to move a stubborn sheep fail. As far as whether the lamb will be freezer bound or not, still hasn't been decided. He is a handsome fella, and I do like a good looking sheep. I could, just not use him on young dogs, so I guess I'm still on the rail about him..... Though I need to decide some thing quick, as Bobby has stated that this week after Thanksgiving, he will be slaughtering what ever sheep I ask him to. I just really hate that I have to decide so early in age, who gets whethered and who doesn't. Grrrrr.
Posted by Darci

Good that Bear used some grit. Bad that the sheep is a PITA. I always remember what a really wise trainer told me. Dogs learn by winning. So in terms of confidence, if you want to keep that PITA to be used occasionally, I would do that, but I wouldn't have Bear work him all the time because it may cause him to amp up in waiting for the confrontation. In the mean time, get that PITA sheep worked by older dogs and teach him a lesson or two :)

Well, to be fair, when within the herd, he never did that, and worked well. Still, gotta figure out though if he'll be Easter supper, or not. Lex has no grip in her at all, and at this point, I dont dare encourage Chris to. I do my best thinking under pressure, so I guess I'll figure it out when I see DH standing there with a gun in one hand and a knife in the other.