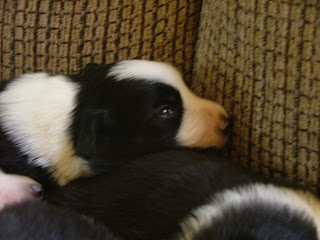 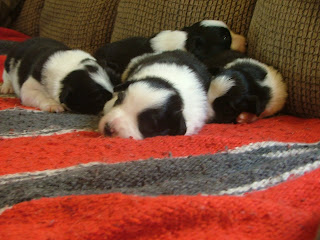 On April 29th, 2008 we welcomed a few new additions to the house hold. Lex, one my Border Collies had 4 little black and white bundles of joy.

I would imagine, that long around the 4 to 6 month old mark, some one will have to remind me about my use of the word "joy".

They're eyes are not open yet, but they can hear me now, as is evident when I walk into the room they are in and as soon as I start to talk to them, they wake up and start wiggling around, looking for the source of the sound.

Im expecting eyes to be open anyday now, and then the fun begins.

So far they have been a bit boring, not doing much but sleeping and eating, and growing like well watered little weeds, but time seems to be flying, as it seems like only yesterday, I spent an entire night sitting up with thier mom till 5 in the morning while she delivered. Lex is a very good mom, and a proud one at that. She just beams when we go in and visit her with the pups all snuggled close to her. Course, Ive always said given the chance, she'd mother an alligator, so it comes as no shock to me. She has in fact, mothered, fed and raised pups that were not her own. On one occasion, she did a smash up job, where another mother dog killed 5 of 7 pups before intervention saved the last two. And she never played favorites. All babies are equal in her eyes.

As I went in a little while ago to snap a few pics of the little cuties to share here, I found one little fella that acually does have his eyes open. Imagine my happiness to see this! Pretty soon there will be no stopping them!

Everyone has been placed, but I will be having fun with them while they're here. And sharing lots of pictures. Not to mention the ones I have decided to hang on to. So, "The Puppy Chronicles" may go on for quite some time to come.

No names yet, we;ll cross that bridge soon enough, but they will all have very traditional sheep dog names, so suggestions are welcome. One in particular will no doubt be named Spot, as he has a big black spot on top of his little white head. It was almost as if I had placed an order for him personally, as he is marked identicle to the first Border Collie I ever had, my dearly departed Dirty Harry Callahan. Just looking at that pup brings back such memories. So, heres the first glimpse of the little darlings.
Posted by Darci

Hey gal! Just wanted to say congrats on the bundles of "joy". lol Like your blog. Thanks for linking to mine - makes me feel all special. If you take the "s" off the end of carson it'll link up properly, by the way. Can't wait to watch those pups grow.

Thanks. Yep, figured out the "s" thing, as I tried out the links to make sure they worked, and found out about yours. Glad ya dont mind that I linked up.
All the pups eyes are open now, and they are just figuring out how scary I am in the morning before I comb my hair or shower. (note to self, Quit scaring the puppies, they can see you now!)Yep, If your gonna be at the Doc's Memorial Weekend Im making it a point to be there, fuel costs be damned!Pups will be to young yet to bring, but I think it would do Miss Stella some good to get out to a trial, so I wont feel naked without a dog by my side, I reckon I'll take her. She'd love to play with Linc. Glad ya like the blog, Im sure It'll soon enough take on a life of its own. Mom couldnt believe I accually managed to put it together since Im pretty computer blond. So, if I dont see ya sooner, I;ll see ya at Doc's. Trying to get together with Becca to get her dog shaved next Sunday over at Julie's, if your not to busy with Chuck reloaded.( Took me several times of seeing that before I finally caught on. Too funny ) then you know what to do eh?? Come bye!
D.

Yepper, I'll be at Dr. Ben's. Dang if I'm not DEAD LAST with Nick on Monday though. lol I guess that's not necessarily a bad thing - if everyone leaves then there'll be nobody to watch us crash and burn.

I will try to get out there to see you guys on Sunday - this coming Sunday??? I think I'm pretty much free - Chuck Reloaded's (haha) parents will be in town so I'm guessing I'll be a tad more scarce around there. Are you doing Zhi?? She's a trip.

Yep, Gonna shave the hairless dog. I was trying to figure what day Id go to the trial, now, I guess you just helped me make up my mind. Crash and burn??...should I bring the marshmellows? :)
Planning this sunday, with or without Becca. Gotta get Stella out to the round pen again. I called Becca this morning, (does she ever answer her phone??) but hadnt heard back from her, so I'll just leave it to her to decide when she can make it, and she can let me know. Hope to see ya Sunday.
Dundee

If you have the choice I'd go to Dr. Ben's on Sunday - the double lift finals (with international shed!!). Monday is only novice stuff. But if you come Monday, bring your marshmallows! I'm going Sunday to camp and then run Monday.

Becca usually cannot hear the phone - you may want to try emailing her instead. My Sunday is still rather up in the air, but at the moment I'm planning to sneak down to Julie's to say hi. ;)

Yea, that probably would be pretty neat to see. Sunday it is then. Gonna work dogs "this" Sunday at Jule's, Im bringing Stella, so she could probably use Nick to keep those sheep in the middle again. Hope to see ya then. i should be there about 9-9 thirty.