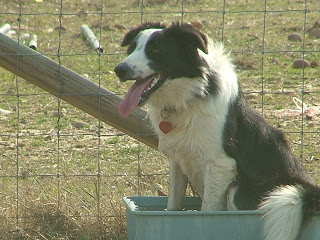 Well, phew. Hard day at the office this week. For a groomer, its either feast or famine, and this is the feasting time of the year. Not complaining, just coming to the realization, that I'm not as young as I use to be.
I went shopping on Friday, only to find that there really must not be much that I really wanted. At least not from Wal Mart. As all I came home with was a 12 roll of toilet paper, an inch less hair, ( got a trim) and a new kind of shampoo. I looked all over that store, and saw lots of things I would have liked to have had, (some day) just must not have been in a real shopping kinda mood.
Then,.... I went on line. Wal Mart ain't got nothin' on the Internet!
I ordered the new book Ive been wanting to read and place into my small but growing stockdog training books library, and then headed to the grooming tool websites. Oh, so much neat stuff nowadays. New brushes and combs, new ceramic blades, clippers a plenty, it all just had me rapt in reading and wanting. But, I manged to stick to the necessities. I ordered a couple of new pairs of clippers, and I'm very excited about trying them out when they get here. A very pretty new grooming smock, and a parts replacement kit for the new clippers for when they need to good tune up. I keep going back and looking at that new comb I want, but am just having such a hard time paying 35 dollars for a dog comb. Ive had the same comb for about 15 years now, and its the exact same kind that I'm looking at right now. But back 15 years ago, I only paid 12.99 for the same comb. Course, I thought that was a lot for a comb then too. I'll probably go back and order it, as it has been a good tool, but I'm just going to have to get over the price first.
The really cool thing about when I placed my order was that I get free stuff too! I got to pick what I wanted from a list of things, and the list was a pretty surprisingly nice bunch of things to pick from. Shame they didn't have any of those combs on that list though.
Got all my dogs Frontline today. I really felt better after I got them all smeared up with it. I hate seeing them itch, as I know how it feels. In my profession, its not hard to get a flea or two myself during a particularly flea infested dog day, which are NOT as few and far between as Id appreciate. Maybe I should have put a strip down my back too! Got them some new bones and cow hooves, and thought as I was paying the bill, that its odd that I have no problem dropping a cool 140.00 dollars on the dogs, and don't even think twice about it, but I'll bitch and fret about the price of a 35.00 dollar comb. Go figure.
Tomorrow, I'm heading over to a friends house to work a few dogs. I'm pretty happy about that, as I ,"A" don't have many friends I enjoy spending time with."B" Don't get out much. And "C" surely don't work/train my dogs enough. So am looking forward to the camaraderie and getting out of my own back yard for awhile.
Posted by Darci