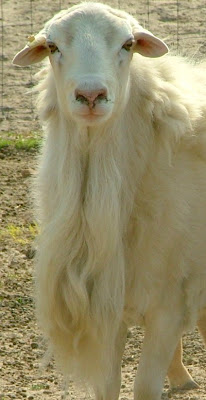 My Ram Jack is back home today after being away for a few weeks to visit with some new girlfriends. I honestly cant say that anyone even missed him with the exception of myself. He was gone 2 weeks before Kyle even knew he was missing, and then it was only because I made the statement in front of him that no one appeared to miss his presence but me. To with he says to me: "Is Jack gone?" This coming from a boy who goes out on the pasture every night among the sheep to feed his dog (our guardian livestock dog) and didn't even notice??!!
Its a sad state of affairs to know that if Jack keeled over dead tomorrow, not dog, sheep or human would mourn his passing but me, and some would probably not even notice!
Jack and I have a very special relationship, and I know of not many folks that harbor rams that can (or will) say that. Some folks think me strange when I go on about Jack, he is unique I suppose, only to me, as I know him as no one else will.
From the day he hit the ground, I couldn't keep my hands off of him. He was perfect. Jack was planned for, hoped for and waited for with great expectation. He was cuddled and held, hand fed goodies and just outright spoiled from day one. 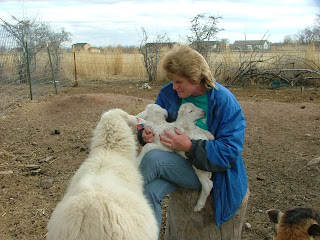 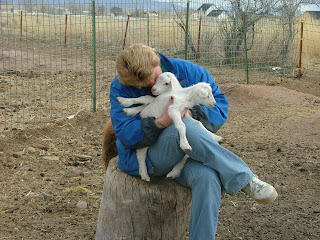 You would think that a lamb treated as such would grow to be a disrespectful and untrustworthy ram, and I had been warned of such things when well meaning friends and stock men saw the manner with which I raised him. Some went so far as to say he would turn on me by the age of two, especially if he was used for breeding, and when ewes were cycling. Not Jack. He has been nothing but a gentleman from day one. Mind you, Jack is not a pet. He does not meet me at the pasture gate when I walk outside, he does not run to me when I go out on pasture. He only comes to me when he is invited. He knows what he is and he knows his place. Two qualities that endear him to me even more. Jack is in my eyes a very handsome ram. Size, build, temperament, head, hair...everything about him exudes the type of sheep he is, and a damn fine specimen of a St, Croix ram. Do I sound like a doting mother? Perhaps, just a little....OK. Yes, I do. But in my own defense, Ive had many sheep, and cared for them, fed them and bred them. Lambed them, and bottled fed some. Tended to them when they were ill or hurt, and done the humane thing when all else failed, but none have ever stolen my heart the way Jack has. 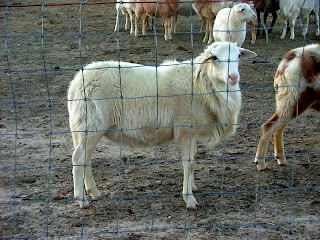 From a young lamb, till he was close to a year old, Jack lived with my mare, a kind and nurturing horse. They formed a special relationship/bond that still is strong today. While out living with her, he had one of his testicles stepped on accidentally by the horse. Imagine my horror to find him in such a state one morning. The cut was long and deep, and there is still a formidable and visible scar. He had to endure a many a patch job, as I medicated and cleaned and fussed over my prize rams misfortune for the months it took to heal. He was a model patient. ( note: Jack never won any prizes, he is prized only by me as I have never shown him)
I was devastated, thinking he would be so damaged that he would never be able to produce because of this hideous injury. I guess I could have taken him to a vet and had a sperm count or some thing done, but I opted to just let him cover the ewes and see what happened. He was the only ram I had, so if we got all ewes in lamb, Id be doing the happy dance, as the ewes I had for him to breed, were all first time ewes, and that was his first season breeding. As it turned out, Jack retained a strong libido and sperm count, covered all the ewes and we had a nice crop of healthy, pretty little lambs with some singles,twins, and one set of trips. A daughter of his is a special favorite of mine, as she is her fathers daughter, and so much like Jack in every way, that she too has earned more than a special place in my heart. 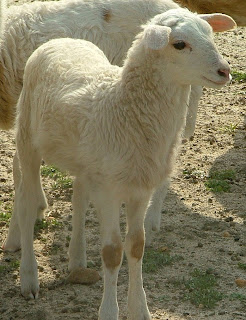 When I moved from Utah to NC. I did some thing many folks looked at as silly and maybe even stupid. A frivolous waste of money. Maybe it was, but I can be an impulsive person, as well as rather over protective when it comes to my animals, and a darn sight stubborn too and I wasn't selling or leaving Jack. I wasn't leaving my horse, and I wasn't leaving my Llama (at the time my guardian livestock animal) and decided to put a large amount of money into shipping them, and well, since they were coming, why not just fill the trailer up and bring 19 more of my best sheep too! And so 20 head of sheep, one horse and one Llama made the 2600 mile trip from Utah to NC. As far as I was, and still am concerned, it was a good decision and investment. The right decision for me.
I'm not quite sure to what extent of a relationship a shepherdess should or shouldn't have with her flock, I know Ive had sheep in the past that I cared for, but didn't care about, if that makes sense, and I'm sure what I'm saying may perplex some, but it is what it is. I make no excuses or defenses in my favor. They are sheep, but they are my sheep, and if I want to be head over heels in love with a certain few, well then, I guess I will just grin and bear it.
Id never had a ram before, Jack is my first. I always borrowed a ram for breeding, as I had heard so many horror stories about the difficulties of keeping rams, and how dangerous they can be.
So when Jack came home last night, I wondered how he would behave after his absence. Would we still be friends? Would he be wary of me? Would our relationship still be intact after several weeks of non communication and contact? Did it take continued daily contact for us to retain our bond? Questions that would have to go unanswered until he had a little time to settle back in and regroup with his ewes, but questions that would be answered soon enough. I think I would be slightly devastated if my Jack were to give me the cold shoulder and start to behave like a normal ram. As it is, I am very pleased to say, (admit) that my Jack is as sweet and kind and gentle today as the day he hit the ground and I scooped him up and vigorously wiped him off and looked between his legs to see what he was. Some folks will claim that sheep are stupid. That rams don't form personal bonds with people. I beg to differ. This morning, when I went out to run dogs, and fill waters and check everyone out, there stood Jack in all his magnificence. He stepped out from his ewes, and watched me as I went about my chores. I was very aware of his steady inquisitive gaze, as it is some thing I have grown accustomed to over the last 3 years and I rather enjoy his attentions. He has always quietly watched me. In my mind, Ive always liked to think, waiting for the invitation to come over and get his head scratched and a jaw rubbed. I missed him overseeing my daily rounds while he was gone. I missed his presence, and missed not being able to watch him as he strode proudly among his small flock of ewes. What a sappy girl eh? Oh well, laugh if you will, I feel no shame, only pride in my Jack, and I feel that none will ever match his quiet, gentle strong presence or take his place in my heart.
So this morning, I entered the pasture after getting the chores done, with a pocket full of bread and a handful of grain and here comes Jack as soon as I call him up. Happy for scratches and rubs, he even gave me one back in the form of a head rub on my thigh, which he has never done and the reunion welled me up and gave me pause to think that maybe I was in fact just a wee little bit silly over this guy. But I kinda think he feels the same way about me. Which truly brings home the saying, you have to give, to receive, and the other that reminds us, that we get back in life, as good as we give. I have always treated Jack with kindness and respect, and he has in turn, always given the same back to me. I am glad he is back home. I have no qualms with loaning him out, I am proud and happy to do so, and hope that he will leave a little of himself in his lambs so others can understand better how Jack with his easy layed back ways and kind and trusting temperament can effect a person to the point of silly sheep adoration. Welcome home Jack! 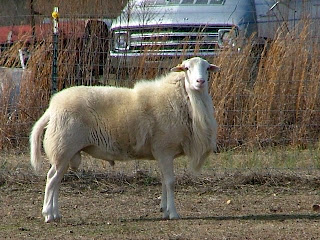 What a wonderful post. I think Jack means a whole lot more to you then you even wrote. Something about keeping the family together. I sure hope you keep a neat son of his sometime..

It is hard to describe how or why I feel as I do about Jack, but in my feeble attempt, Im glad I could at least give some inkling of how his presence effects me. To me, he is a very special guy.

He is beautiful, thank you for sharing your thoughts and feelings about Jack. I can understand why he is so special to you...