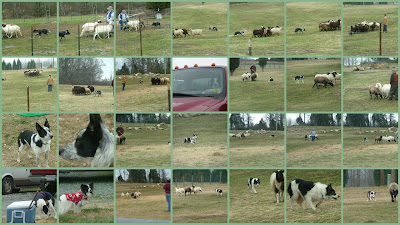 Sunday a bunch of us gals gathered at Julie's farm for a lesson day with Robin. I always look forward to these days, not just for the dog work and learning experience, but for the camaraderie too. There were a couple of new faces and dogs, and I really enjoyed watching their dogs, and meeting them. Nice gals, and nice dogs too! I brought Chris, but after I brought her out, we all agreed, she was still favoring her hind quarters from a hit she took last week from Bear and thought it best to give her a bit more time to convalesce. Poor Chris had to sit in the truck all day and watch everyone else having fun. :(
I took Hank too, just as a back up because I wanted to hear what others thought about working Chris, and if the general consensus was that we not work her yet, I had planned to use her lesson time for Hank. Nope, not ready yet. He was quite afraid of Robin's spaghetti noodle and had no intention of doing anything as long as that lady had that big wonky long thingy in there with him. He wanted to get to the sheep, but not that bad! So I just worked Bear, who is swiftly becoming a major favorite dog of mine. Reminds me I really need to get in touch with Dee and thank her again for giving me such a nice dog and getting her up to snuff on his progress.
First we worked Bear in the round pen, and I fell flat on my fanny. That quick walking backwards thing on the slick mud and sheep doo...well I knew it was gonna happen. Id already felt myself slip a couple of times, so when I started to go down I was sorta prepared and rolled with it. Oh how I wish I was a weeble. Weebles wobble but they don't fall down. Lucky I had my coveralls on and so my clothes didn't get all wet and muddy. What was priceless was the look on Bears face. When Robin helped me up and I looked to see where my dog was he had a look of confusion and concern, like he wanted to come over to me and see if I was alright, but wasn't sure if leaving the sheep and moving off balance was an acceptable thing for him to do. Luckily, I may not be a weeble, but more like a bumble. You know the kind on the Rudolf the Red Nosed Reindeer classic. Bumbles bounce! And so I was not effected by the fall and surprisingly am not suffering from it today as I had feared either. You know those falls, when you feel OK when it happens, but ya just know your gonna feel it the next day.
Anyway, working with Bear is a lot of fun, He is such a nice dog and really wants to do the right thing. He has a lot of really nice qualities, He is pretty awesome, and I feel so lucky to have him.
It appears to be quickly becoming a ritual when we have lesson day, that we all load up in my truck, which could be a humorous post within itself some days. (if my truck isn't trying to dump some one out, by the door flying open while going down the road, its trying to lock folks in and not let them out! ) and went to lunch at a restaurant that I am at a loss at the moment to remember the name of, but they have some of the best burgers this side of the Mason Dixon line! And the chips! Well....they are most days a reason all by their self to go. Yesterdays chips weren't their best effort, but the burgers well and made up for that. Yum!
Laura's poor Nick had to sit this one out too, as he tweaked himself at a trail last weekend, and so is on light duty too. I got there to late to get to see Linc working, but I hear is is coming on well, and ready to start. Yea Linc! The weather was fair, we got about a spit of sprinkles, and the sun tried to come out once. All in all, it was just a fun day with plenty of dog work and laughs. I'm sure there would have been more laughs if everyone had seen me flat out on the ground, but I wasn't about to do an instant replay for those that missed it. Sorry gals. Maybe next time! LOL
Posted by Darci

Awesome! You need vids girl! Especially of when you hit the dirt! lol!
Sounds like fun!

Oh I think we all had a blast...too bad I missed the locking doors, the truck must have changed its mind since it tried to get rid of me!!


Hey Kelly! The truck has decided to change its ways, from everyone out to no one gets out! I think the back seat may be posessed LOL. Lets just hope next time it doesnt decide to be a convertible!

Thanks Kelly, She seems to be getting along pretty good, but not back 100 percent yet. Maybe by the 3rd she will be back after them sheep again. Hope so!

It was a lot of fun sunday and great to see how well the dogs are coming along. I hope Chris is all better soon!

Thanks for thinking about her Robin. Not a lot of change yet though.
I talked to Dee last night, she said she has been hearing good things about Bear from you guys. Thanks for the good words.