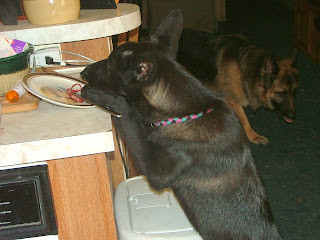 I was invited by Carolyn Of BCxFour to follow through with a "meme" quest, in where you go to your pictures, pull the 6th picture from the 6th file, and write about the pic. Im game, besides, I didnt have anything else to talk about at the moment.
Of all the pictures of my Border Collies I have, this would have been the last picture Id have thunk could have shown up. Carma I reckon.
Folks, meet "Diablo" While he was here, I called him Masi,(pronounced Mass Eye) but he didn't stay long.
A bunch of years ago, I took a dog in for training, A German Shepherd. He was a beautiful, and brilliant dog, and I enjoyed the year he stayed with me. I was able to get a BA on him and a Sch1. When it came time to give him back to his owner, I tried hard to buy him, but to no avail. The owner knew if I wanted him, he must be a keeper. (as I'm pretty particular about the Shepherds I keep) So I then contacted the dogs breeder and asked if they ever made the same breeding again, if he would put me on the list for a pup. Just two days before I am packing it all in to make the move from Utah to NC I get a phone call from the breeder. Mind you, this is 3 yrs later. He tells me he has 5 pups left, 6 weeks old and was I still interested in one. My head went to spinning. Well, Yes! I wanted one. Was I in a position to get one? I already had 11 dogs I was bringing with me to NC. Well hell, whats one more, lets just make it an even dozen. So I traveled 500 miles round trip the next day to go pick up Cree. A beautiful male pup. I kept and worked with Cree for a yr and a half, and as lovely a dog as he was, he was the biggest chicken dog I think Id ever met. He wasn't like his brother in temperament. As I had purchased him to train for a specific sport, and he was proving daily that he wasn't going to be a dog that could take the training, nor did he have the temperament to do the bite work, but he was a tremendous and loyal companion, and was very stable. He'd make some one a very nice OB dog and family companion. I sold Cree to a family that had long admired him with 4 daughters ranging in age from a pair of twins, ages 8 yrs old, to an 11 and a 13 yr old. Cree was in his element when it came to the little girls, and was a perfect fit for their household. Although I had cautioned them that I didnt ever think he would never make a competition dog, they had decided to try their hand with him anyway. True to my warnings, they found out that I was right, but had gotten a taste of the sport and decided this was the road they wanted to travel, and so decided to drop a good wad of money on a black 2 yr old Chec bitch, and had her Imported. She is a magnificent,tremendous dog. I wish I could have bought her, but alas, Ive not got 1,800 hundred dollars plus shipping to drop on a dog.
Well, I hadn't had Cree neutered, he was a fine specimen of the breed, just lacked the temperament to complete the rigors of training, and at a yr and a half old, I felt he was still developing physically and I wanted to see if he'd fill out as he got older. So he was sold unneutered. Well, Cree and Red ( the chec bitch) decided to get together, I'll never know for sure if it was an accident or not, but that was what I was told. Masi was a product of that breeding. When they came and told me they were expecting pups, I was.....intrigued. But declined a pup. Two of the pups ended up at the store I work in at 5 months old, a trade for a horse for their daughters. It bugged me that they were there, well, OK it pissed me off for many reasons. After watching and interacting with them both for a week, I talked to the owners and asked to take one of them home for a few days to see if this chec bitch had contributed anything to giving the pups a tougher temperament than their sire had. Masi was a fun, smart, good looking pup. Very loyal and willing. A typical 5 month old German Shepherd pup, and into everything. Masi proved to be a carbon copy of his sire, except in that he had taken on the black sable coat color from his dams breeding. This picture doesn't do him justice,but he was a handsome guy. Needless to say, I took him back to the store,and he was eventually sold. I don't know where he is now, or who bought him, but I really hope they are enjoying him. He was a neat pup. Very vocal, but a neat pup. 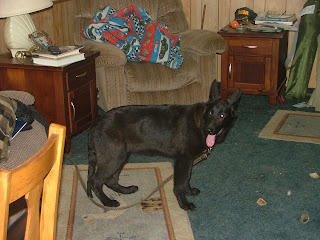 Oops, I forgot I as suppose to tag 6 people myself now, As small as our little blogger community is, it looks like as Ive been trolling around, most everyone I know already has been tagged. I guess I'll just kick back and see what everyone else comes up with. Thanks Carolyn, it was fun going back to some of my older pics.
Posted by Darci