Day One of the Jack Knox Clinic 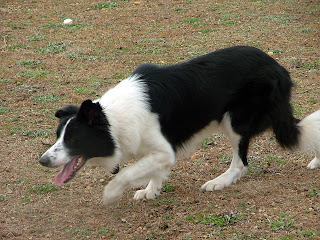 I am sorry the weather wasn't the best :( But I am sure you learned a lot from Jack!

I really like their method and he and Kathy have helped me out so much with my dogs!

I hope today is better as far as weather!

This is Sunday, what happened to Saturday...did you go? Such dedication, to freeze your butt off not to mention that poor dog's feet too. Bet Bear didn't have any warm clothes on, and don't tell me he wasn't cold sitting around out there waiting his turn. Why doesn't this Jack fellow set his clinics in the warmth of spring? AND what was so damned important that the cell phone had to keep ringing? Death in the family, house on fire????

The "poor dog" was happily and comfortably sequestered in the cab of my truck with a warm blanket and a bowl of water and a chew bone until it was his turn to work, once he saw sheep, weather didnt matter to him. This fella Jack goes around the country all year long giving clinics, and we try to keep a yearly time slot held for each year. Honestly,January around here working dogs normally isnt bad at all, the weather is great for sheep and dogs,if it were to warm we'd kill them with all the running. Cool weather is the best weather to train in for sheep and dogs.
As far as the cell, I can gaurentee you it didnt ring sat or sun with his number on it. No house on fire, just an idiot with a cell phone and a burning desire to piss off his wife. Im begining to think he has no sense of self preservation.

Darci,
If you want to recreate those yummy brownies, just get thee to a store and buy a box of Ghiardelli brownie mix. I used to make brownies from scratch, and if I do say so, they were pretty darn good, but they can't top those brownies in a box (and it seems to me that something else I bought over the weekend had a coupon for more of those brownies, so I see some in the future as well). Funny how we had tons of food and desserts, but had leftovers only in the main dishes and not the desserts. I guess that means we were all busy padding ourselves for the cold. lol!

Darci's mom,
People who have been having Jack out for a really long time have dates reserved in advance (as do we). Because we came to "the game" later, there were fewer "good" dates to choose from, and since I took this clinic over from someone else in NC, the dates were pretty much already set for us. But as Darci said, it's much easier on the sheep (especially the wool sheep) and the dogs when the weather is cooler. Granted, it would have been nice if it hadn't bene that cold, but I wouldn't have traded the cold for the torrential rains (and warmer temps we'd had the week or two before that, so it's all relative I guess!

Hello all, here every person is sharing these
kinds of know-how, thus it's nice to read this webpage, and I used to pay a visit this web site every day.

Here is my homepage; kliknij