Contrary to these pics, (they really are just playing) Bear and Hank really are the best of buds. But this was Hanks first snow and he wanted to get the most from the experience cause he was told to enjoy it, as it wouldnt last long. He also knows there are not very many instances when he can throw himself down and grind himself into the ground rolling in ecstasy, that I wont yell at him thinking, (and Im usually right) that he has found something utterly putrid to roll in and tell him to "get outta that you goofy *#!*!" Which is usually followed by a good hosing off.
Hank was absolutly delerious about the snow, and was having a grand time making snow angels. 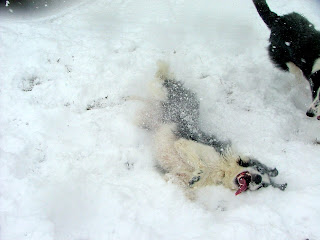 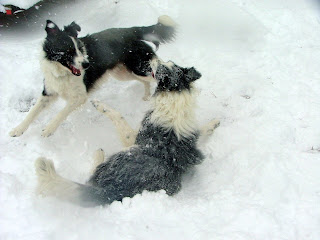 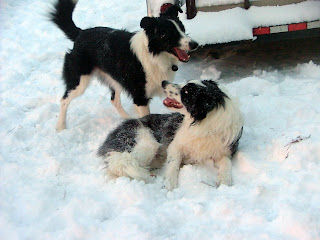 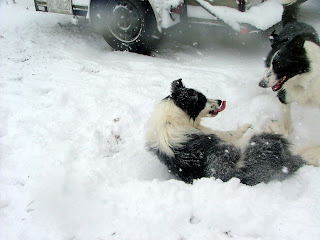 Bruin watches the fracus with the mildest of interest. 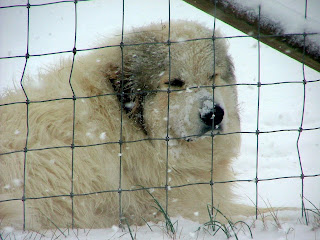 Wanting the boys to work it out on their own, I left them to it, and started wondering what the horses and sheep were up to over there all huddled up with their heads together. So I sent in my spy. Turns out specialist Bruin reported back that they were all conspiring to over throw the human, make good their escape and take over the nice warm confines of the house and have a party, leaving me out in the cold. 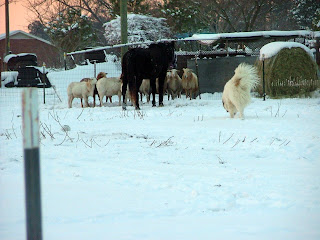 I alerted Chris the the possible attempt of a mutiny, and she assured me that she had my back. 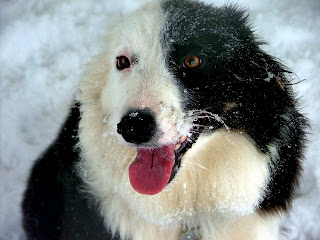 So with my back up Chris in place, I again sent in my spy to non chalantly, put a bug in someones rather large ear, that we were prepared for any and all attempts to bury said human in the snow, and that any sheep or horse that tried to would be cut off from thier nightly treats of grain and carrots. 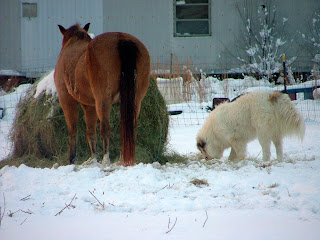 Mean while, Hank is still trying to get his point across to Bear and apparently with out much success. 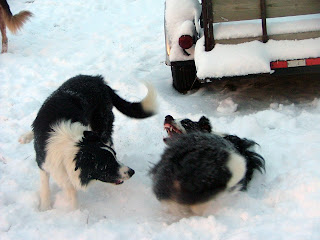 I cheer Hank on, er I mean, I advise Hank that a little more physical force might be needed to diswade the likes of Bear, who seems to be throughly enjoying the fact that he has Hank in an absolute snow angel territorial tizzy. 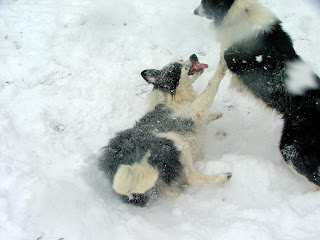 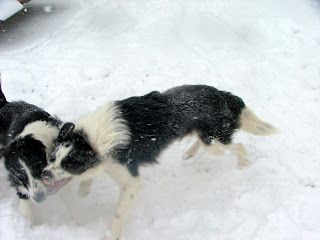 And hunkers down defending his snow angel. Bear, has finally come to the realization that Hank means business. "Opps, I think I really have him pissed off now..." 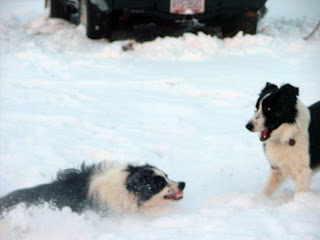 And makes for a hasty retreat. 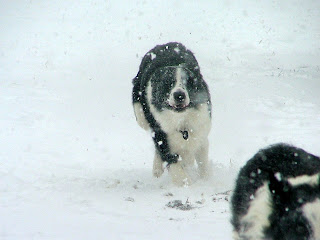 While Hank looks on triumphantly, leaving Bear with this one last passing thought. "And dont let the doggie door hit you on the ass on the way out!" 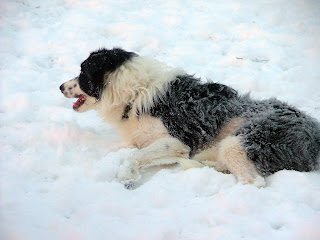 You'll have to forgive any spelling and puctuation errors,as I cant for the life of me seem to get the spellcheck to work today! I told you I was having technical difficulties....
Posted by Darci

Great photos!! Love Border Collies in the snow. Enjoyed your blog...I will be back to visit you and your dogs often. :)

LOL, this post was fun, your snow shots are great...especially the first one of Hank, that one is too funny. It looks like he was really enjoying the snow. :-)

Thanks Andrea, dont be a stranger!


Samantha, when I said Hank was delerious, no truer words were ever spoken! Ive never seen a dog so in love with snow! LOL He couldnt get enough of it, and was loath to come back inside. Every time Id get him up on the porch to come in, he'd jump back off the porch, and be rolling in it some more! The goofy pup! We all had fun, but I have to say, Hank made the most of it and had the most fun of everyone! LOL