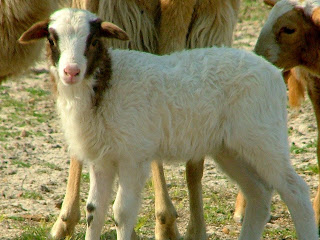 Oh yeah, the waiting game. That starts here in about a week. And I know the feeling of playing the dog in a small pen and the sheep still running around in circles. So did they lamb overnight or did they trick you? I used to have one ewe that would play false labor games and you would sit out there freezing for a hour or so each night waiting for the lamb and then she would get up and go back to normal until she finally had the lamb about a week later when you were not in sight.

Sorry, I some how hit the publish post button, before I was finished with writting the post, so you can go back and read the finished product now. I think Ive had to much coffee today, as my fingers seemed to be involintarily hitting keys before checking with my brain! LOL

Oh yea,Im very familiar with them waiting till I turn my back before having their lambs, which disturbs me, as I like being there when they have them, just in case.

Looking forward to the pictures of the babies. How adorable they are.

I love new born puppies and new baby horses, I think they are sooo cute. But NOTHING! is cuter than baby sheep! Absolutly nothing! Ive got my camera batteries charging already.