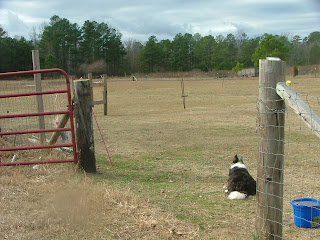 Hmmmm, 'tis a puzzle. Perhaps the Gods are suggesting you taking Bear to work for a bit, or, perhaps Chris is coming into heat? or, perhaps your life has just been TOO predictable? When I read everything, I wondered if sometihng odd had been out in the field. Lucy and her training buds have experienced that (with evidence of such, as in dead bodies- not sheep). I had an odd thing happen with Lucy not too long ago- I would do just as you are doing- put her up for a bit, and do a walk about at the back forty of your fields- just to clear them of anything weird.

As I read your post (and not being a sheep/dog person~just an interested party) I got the impression that Chris sensed something alarming in the field. Especially since she didn't want the sheep to come back out of the shed. I agree with the previous writer, when she suggested you walk about in the back forty as a precaution to see if there might be something strange out there. Dogs sense of smell is much greater than a human's, so perhaps she knows something you don't know.

This blog page was created by and is written by my beautiful daughter, Darci. She has always loved to write since she was a small girl. And animals she loved more than anything. Brought home with her one day a gorgeous Afgan Hound - "can we keep him, huh Mom?" Like it was a stray!!! Found the owners and the dog's name was "Napinthee" (remember Darci?) Another little doggie (a Yorkshire Terrier - adorable little pup) for whom we couldn't find an owner and YES we kept her. Darci named her Puddin (you know, Yorkshire Pudding!) My little girl loved hanging out at the horse stables, which got her in trouble with Mom on more than one occasion! FINALLY, she has her own horses! I'm very proud of my "little girl"...and I truly enjoy reading her blogs very much. Happy New Year sweetheart!

OMG MOM!! You figured out how to post! Thats geat! Cept now dont you go embarassing me now and telling everybody what a naughty little girl I was! ( She says as she grins and shakes her finger in her mothers general direction) LOL
As always mom, you are my biggest fan.
XOXO